Attacks on the Left, the Labour Movement, minorities and alternative spaces are part of the DNA of fascism and that is nothing new.

While the ‘Gilets Jaunes’ in France is a radical mass social movement fighting for improvements in people’s living standards, the Manchester ‘yellow vest’ protest was just 50 of the same old fascist dregs in the UK. Rather than challenge the rich and powerful, the boot boys for the capitalist class, the far-right seek to attack working class organizations and spread their politics of fear and bigotry, as shown by their actions on that day. 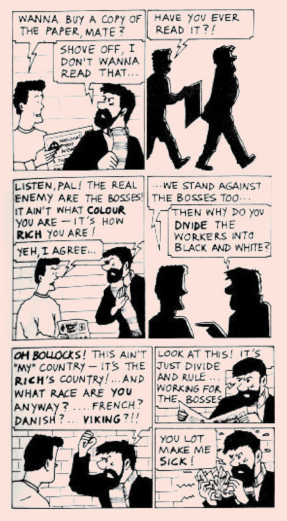 In face of these threats there is a solidarity mobilisation supporting the RMT in their ongoing strike at Leeds Train Station on Saturday 19th January from 9am.

RMT Pickets will be from 8-11 around the entrances to the Station and we encourage you to join us in support for RMT’s ongoing strike action in Leeds.

Leeds Anti-Fascist Network is also calling on all anti-fascists to oppose the ‘Yellow Vest’ protest in Leeds scheduled for 12 noon in Leeds City Centre on the same day.

If the Left does not challenge the right, that can only mean that they grow in confidence and that has serious potential of real physical harm. We need your support – come by if you can and please share this call to action!

This entry was posted in Uncategorized. Bookmark the permalink.